After beef, Maharashtra government may go for complete liquor ban 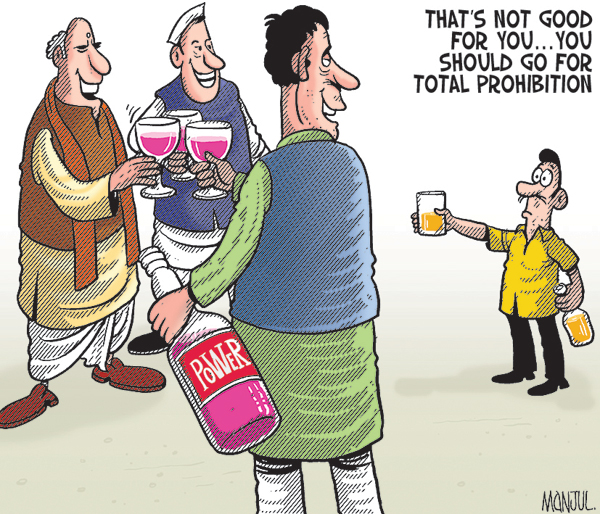 Chief minister Devendra Fadnavis on Thursday said the state is positive about implementing a liquor ban across Maharashtra. However, the final decision will be taken after taking stock of three districts — Gadchiroli, Chandrapur and Wardha — where a ban is already in place.
Fadnavis made this statement while replying to NCP MLC Sandeep Bajoria's question in the state legislative council. Bajoria said that in Yavatmal district, a police patil of Yavali village, who was against illegal liquor sale, was stoned to death. "It is an unfortunate incident... the government is enforcing the ban in Yavatmal district but people who are part of the implementing machinery are being killed by liquor mafias. It is discouraging. The government should take stern action against them," he added.
Fadnavis said, "We will impose the (liquor) ban across the state after studying the results of the same currently imposed in three districts in the state."

One must give a 48 hour cooling period before regurgitating media reports especially if the news is about the 'misdeeds' of any bjp government. Info about the prohibition in three districts.

"The state government, on Friday affirmed that there is no plan to ban licensed liquor sales across the state, but to prevent illegal sale and production of spurious liquor. Chief minister Devendra Fadnavis, on Thursday clarified in the state legislature. He said legal prohibition always puts additional pressure of the police force which is already under duress in view of law and order and investigations."

Alcohol is already banned in the adjoining districts of Wardha and Gadchiroli. There is a blanket ban on the sale, purchase, production and consumption of liquor in Wardha, as it is closely linked with Mahatma Gandhi, whose ashram is situated in Sevagram. In the case of Gadchiroli, the decision to declare it dry was taken in 1992. There was a strong public outcry to ban alcohol because of the growing Naxal movement there.

Chandrapur, a district in eastern Maharashtra in the Vidarbha region ... of 847 gram sabhas and gram panchayats 558 favoured prohibition

There is No Beef in Vedas. A Brilliant Explanation by an IIT Alumni

Beef ban is an attempt to impose upper-caste culture on other Hindus: Kancha Ilaiah