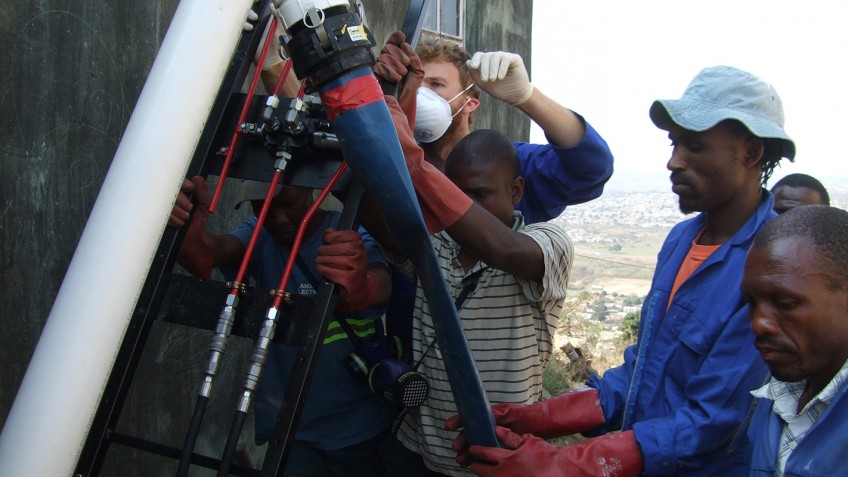 Tate Rogers (in rear, with white mask) works with a local pit-emptying team in South Africa to field test the Excrevator. Photo courtesy of Tate Rogers.

In 2011, an engineering student came up with an idea to help people in the developing world deal with raw sewage. His goal was to use technology to help save lives by limiting people’s exposure to the pathogens in human waste. Four years and several countries later, he’s still working on it – and the technology is beginning to come into focus.


Here’s the basic problem: in many parts of the developing world, people don’t use toilets. Instead, they use pit latrines, which quickly fill up with raw sewage and have to be emptied by hand. Emptying those pit latrines means coming into contact with human waste – and whoever has to empty those pits runs the risk of contracting a disease. 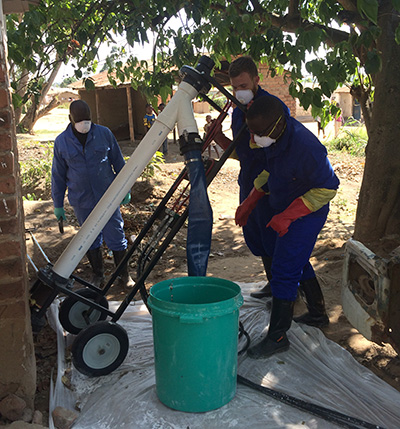 Rogers, (in rear, holding the equipment) field-tested the Excrevator with collaborators in Malawi. Photo courtesy of Tate Rogers.

NC State engineering professor Bob Borden presented an undergraduate class with this problem in 2011, and a student named Tate Rogers had a possible solution. Rogers proposed the development of a hand-held tool that used a gasoline-powered auger (like a giant corkscrew) to pump the waste out of the pits into portable containers. The twisting of the auger would act like an Archimedes’ screw to move the waste.


That second grant allowed Rogers to do additional field testing in India, South Africa and Malawi. And he learned a lot.


“The Excrevator works well with waste,” Rogers says. “But there is an issue when it comes to dealing with garbage.”

The problem is that human waste isn’t the only thing that ends up in pit latrines. As Rogers puts it, “If you can imagine it being in a pit latrine, we’ve found it.” 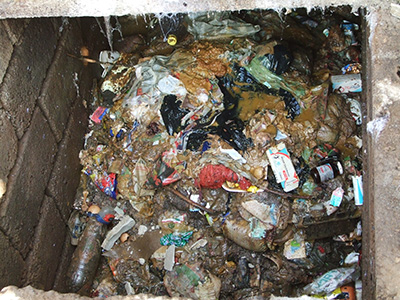 Pit latrines can be filled with solid trash (like this one in South Africa), which can clog the Excrevator. Photo courtesy of Tate Rogers.

Stones and solid objects don’t pose much of a problem. But plastic bags and clothing can get pulled into the auger, clogging it completely. To address this problem, Rogers and the rest of the Excrevator team have had to develop a variety of solutions.


“One way to deal with the debris is to fish it out, so we’ve developed tools to make that safer and easier,” Rogers says. For example, they developed a strong, retractable claw at the end of a pole that can be used to snag and pull out Excrevator-clogging fabric or plastic.


They’re also developing a powered “macerator” that can grind or chop up any debris, so that it can pass through the auger. Tracey Sisco, a civil engineering master’s student at NC State, has been completing laboratory testing on different mechanisms for handling trash.


“Every pit latrine is different, so we are developing a suite of tools that can be used to deal with whatever obstacles you run into at any given pit,” Rogers says. “And all of the tools – the Excrevator, the macerator, and a related vacuum system – can be run by one power source, called a Powercube.”


Rogers is now a research associate at NC State, and works part-time on waste management research at RTI International, but he’s still working on the Excrevator – and he has high hopes that it can make a meaningful difference in the near future.


The Excrevator team is now applying for a new grant, which would allow them to continue testing and fine-tuning the technology.


“Based on our fieldwork, we have a really good understanding of the challenges surrounding waste handling in the developing world,” Rogers says.

“And we’re optimistic that we’ll have reached a point in the next couple of years where we can move from prototype development to begin scaling up manufacturing for widespread use.”

How one citizen made a Chennai street safer! In 10 minutes.