A Pioneer and his Musical Saga

Share:
Facebook Twitter WhatsApp Email Share Link
Would you have a Donkey as a mascot for a musical troupe? Read our story of this week's persona who always believed in breaking the stereotypical box!

​
Making a transition from worker bee to chilled – out retiree isn’t always simple and easy. People who make it look easy are the ones who have created and crafted a life based on values and worked tirelessly to leave a legacy behind. Ramjhi Issaimazhalai aka Abhaswaram Ramjhi is a person whose identity is closely tied to his career. At the age of 70, he is entering into his retirement phase of life with contentment. He played a key role in organising the recently held Bharatheeya Ganathon - Mass Singing marathon featuring 10,000 Girls at Chennai. 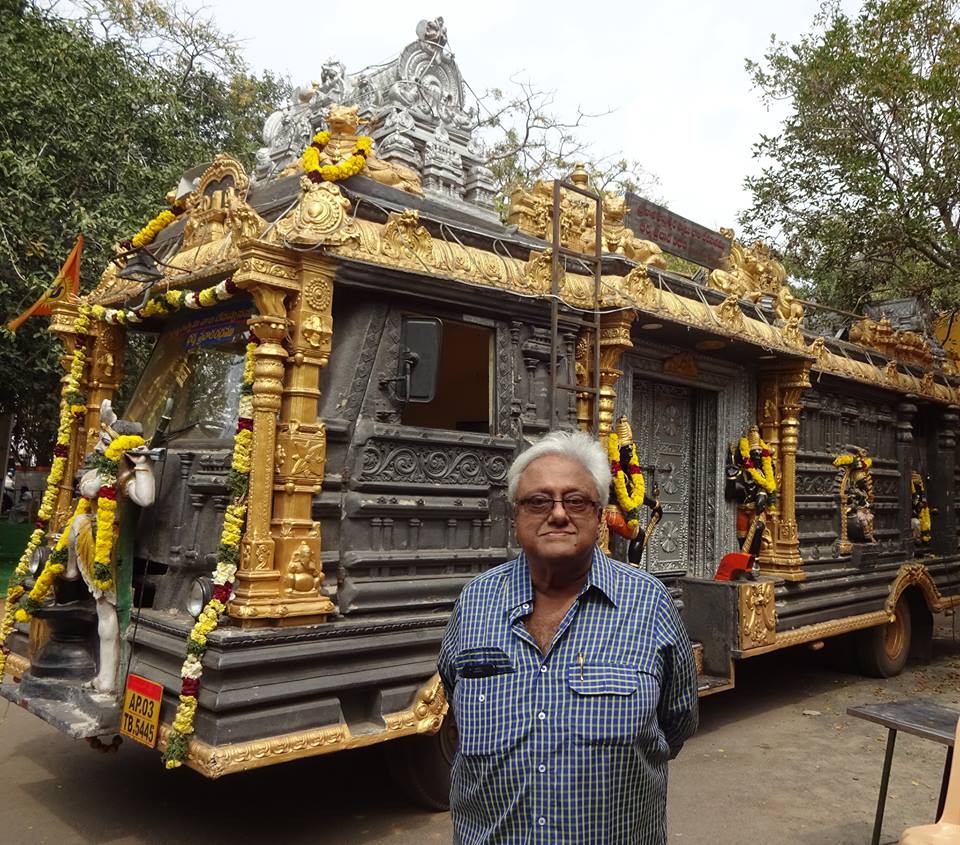 Born into a family of legends, Ramjhi’s DNA was coded to become a pioneer. His music troupe Issai Mazhalai was India’s first professional music group featuring children. Over the past seventeen years, his institution has groomed tiny talents into internationally acclaimed professional musicians. Back then, children had the opportunity to dance or sing and exhibit their talents only at school annual day celebrations. No one ever dreamt of presenting children on stage and entertaining the public. Getting a slot for them at sabhas during the margazhi music festivals was impossible. But today all the unimaginable pathways are open for them. We should only call him a visionary to make it happen.

​
The journey of Issai Mazhalai started in the year 2000. Padma Bhushan Kamal Hassan inaugurated it at the Music Academy. This inaugural event itself created waves in the music industry for the first of its kind idea. Though the idea was to launch as a Film music group, later it was expanded to Carnatic Vocal and Instrumental music. Issai Mazhalai’s concerts got telecasted in Jaya TV for ten years titled Bala Brahmam. From 2 to 3 concerts per month, Issai Mazhalai children moved up to do 45 shows a month at various places. They became even busier during the December Carnatic Festival. They did around 116 shows in the month. 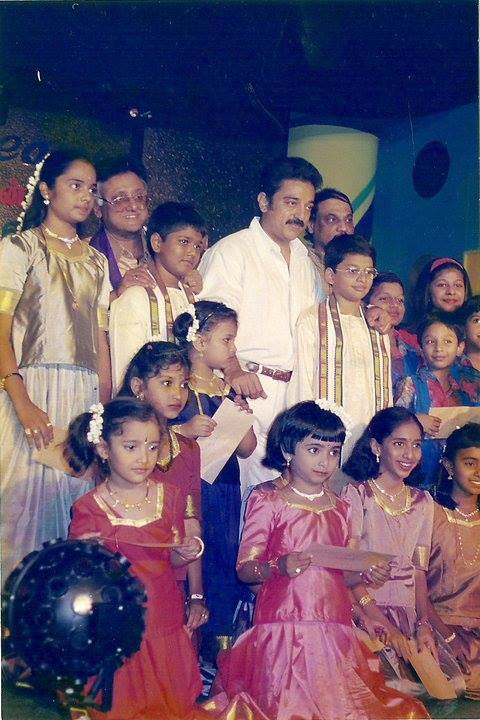 Issai Mazhalai had around 14 centers in Chennai, where experts trained the children. Best of the Best would be picked from the whole lot of 1500 kids across the training centers and made to sing in the concerts. These kids did not stop just at singing concerts. Soon they got opportunities to sing in movies. Issai Mazhalai kids sang A.R.Rahman's Oscar-winning "Jai Ho" song in the film Slumdog Millionaire. Music directors from Maestro Ilayaraja to the recent Santhosh Narayan offered opportunities in their music. Ramjhi shares that the most memorable performance was at the Rashtrapathi Bhavan, performing for the late president of India, Dr.APJ Abdul Kalam. Initially, the event had been planned for 20 minutes but continued for 2 hours on request by the President himself. They are famous not just within the country, but abroad too. They have travelled to countries like USA, Canada, Japan, Zambia, UAE, Kuwait, Singapore, Malaysia, Srilanka, and Azerbaijan. 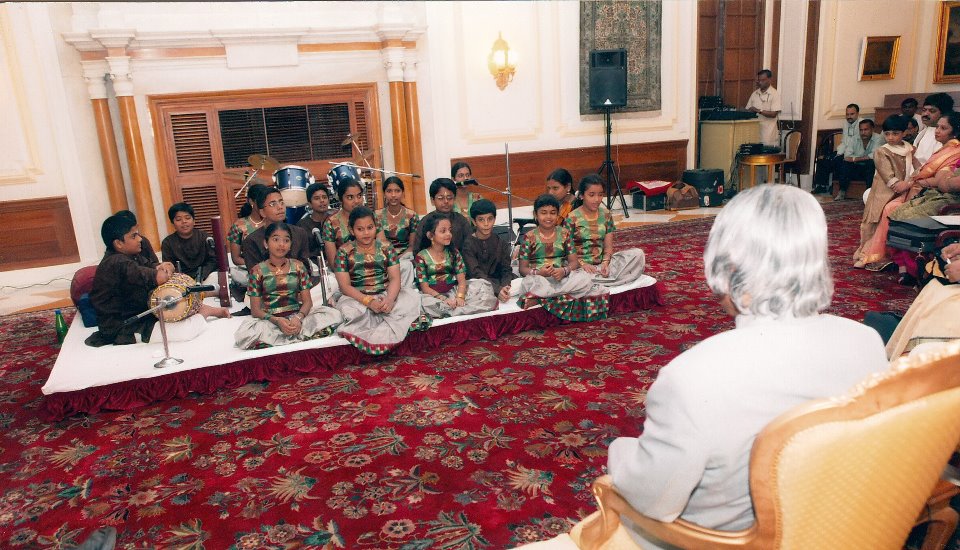 We wanted to take a trip down his memory lane to the days before Issai Mazhalai. All that he has done so far in his life has been out of the box ideas. He recalls his work as a Drummer in the music band named Blue Ricks run by this brother in the year 1967. Later when his brother moved to Canada, Ramjhi started his own group and called it Frustrations Amalgamated. The band became famous very soon and went on to win Best Rock Band in India in the year 1972. Four years later he ventured into Film music with a band named Abhaswaram, choosing donkey as its mascot. Will someone even dare to call it that way and invite Bharat Ratna MGR for its inauguration? It was purely his guts and thirst for doing something different.

He had graduated in Hotel Management studies and later opened a Chinese restaurant named Chop Sticks. He went on to open a School for Hotel Management tying up with a Swiss-based organization. He was the founder editor of Mangayar Malar – a magazine exclusive for women. He worked briefly in the Radio and Television industry. He started his career in All India Radio and has been part of various shows in Doordarshan in the early 1970s. He directed and produced shows for satellite channels too.

After the launch of Issai Mazhalai, there was no looking back. It slowly became THE launchpad for children to stardom in the field of music. Today Issai mazhalai kids have made their mark both in playback singing and Carnatic music. He has received numerous awards and recognition for his service to the music industry. Kala Seva Bharathi award by Bharath Kalachar, Sangeetha Kala Vipanchee Award by Dr.Balamuralikrishna, Seva Rathna Award by Cleveland Thyagaraja Aradhana Committee are to name a few.

Ramjhi is now dedicating his time and life in service to God. He has embarked on a spiritual journey to renovate and restore ancient temples that have been abandoned over the years. He decided to take over this responsibility after his dear friend Rajesh’s demise, who was doing it for several years. Aavundeeswarar Temple in Nemam Village, situated near Thirumazhisai has been identified. It’s a 1200 years old Shiva temple built by Jayam Konda Chozhan. He has now built a new Ghosala. Donors have come forward to donate milch cows so that the temple can survive from the income . He is looking forward to taking up many such projects with the blessings of Lord Aavundeeswarar and Amirthambikai.

He lives with his wife Shobhaa Ramjhi, an International Grandmaster in Reiki and retired principal of Madras Institute of Hotel Management and Catering Technology. Earlier he was always referred as the son of the legendary director-producer K. Subramanyam. But now he is often quoted along his grandchildren - Music director Anirudh Ravichandran and the child prodigy Subramanyam Karrthik. He has adopted a happy and relaxed lifestyle. Looking back at this journey he feels blessed and content.

Watch the latest Ganathon organized by Abaswaram Ramjhi, earlier this year in Jan 2019. This is the 3rd edition of the Ganathon, conducted to promote Hindu culture, patriotism and universal love towards our fellow humans.

Dear Sir/Madam, delighted by your Baratheeya Samskara Ganam 2019 and early presentations. Please consider a few suggestions. If you can organise the same in a stadium would be better, minimising dust and seating that gives a sense of inclusiveness to all. The stage should be occupied by the leading participants. VIPs can be seated in the front of the audience as Reserved. Drone photography to be used to capture the singers line by line. Children would enjoy the recognition. Limit the number to 10000 or11000. some schools can be accommodated in turn, say 200. During the next year, lottery method can be used to pick the 8000 from the 10000 of the previous year. Best wishes. panini

I wish to add a few words about Sri Abaswaram Ramji's mother . It was his mother Smt S.D.Subbulakshmi, (who later became wife of Director K.Subramaniam), persuaded Director K.Subramaniam to give young M.S.Subulakshmi, daughter of her friend from Madurai, Shanmugavadivu, a chance on the concert stage at the exhibition he was organising in connection with the 1932 Mahamagam Festival in Kumbakonam. It was on that occasion only Smt.M.S entered the stage. Later, when Director K.Subramaniam filmed "Seva Sadanam" he gave the chance to Smt M.S. to act, thus she started her film career as well.
All children of Director K.Subramaniam have become famous in their field of choice.
Brahmanyan
Bangalore.
You must log in or register to reply here.