The survey of more than 10,000 respondents across northern, southern, western, eastern, and central India during May-June 2018, showed that 62.1% of the elderly did not get such care. More than half of these people, 52.4%, said they primarily need traditional family support, says a study by Agewell Research and Advocacy Centre. 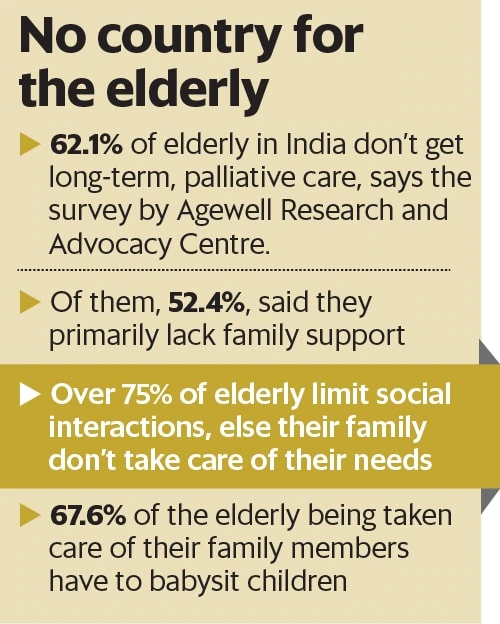 Older people in India often face problems such as disability, restricted mobility, loneliness, poverty and lack of awareness on accessing old-term care. With a fast growing population of older people, the ever-increasing gap between generations and the fast and demanding lifestyle of young people, for a majority of older people, life is still a struggle for independence.

“According to 64% of elderly respondents, loneliness, marginalization, and isolation are the most critical issues faced by bedridden, elderly patients as they cannot visit, meet or interact with their relatives, friends and neighbours," said Himanshu Rath, founder of Agewell Foundation.

The elderly have to compromise and make adjustments in their lifestyle according to the wishes of the younger members of their families to ensure they are cared for, the study revealed. It highlighted that 67.6% of the elderly being taken care of their family members have to look after the children of the families. They have to perform tasks such as babysitting in return for proper care and support. The survey of more than 10,000 respondents across northern, southern, western, eastern, and central India during May-June 2018, showed that 62.1% of the elderly did not get such care

Many elders in the country are sitting ducks for exploitation by the next generation.

Elders can be as independent as they wish to be if only they have the will power and are economically viable.

They can easily live separately and have a social life of their choice.

Most do not try that and prefer to hang on to their children for reasons of misplaced affection.

If they get exploited by their children, it is their own doing.

I have no sympathy for this lot.

Whole world is full of human resources . They can bond with some of them and live life to the full.

Once the elders become dependant due to emotional reasons it is their doom.
K

Sikhs play a significant role in helping the elderly in terms of medical care.

For a princely sum of Rs 50 I got a session of cervical physio therapy and ultra sound radiation and heat pack.

The same would have cost a thousand rupees in a private clinic.

All gurudwaras in delhi offer these services which most do not know.

Of course the word charity is associated with it. I thought it was a sensible move from the sikh community.

Our temples can also emulate them and offer medical services to the poor.

[Wanted] Home care for the elderly